We would  like to use the sequence of graphics below to illustrate how we can develop images to be used in design applications. See how the significance and meaning of the photo changes as it progresses through various treatments.

Play “Spot the Difference” in these images 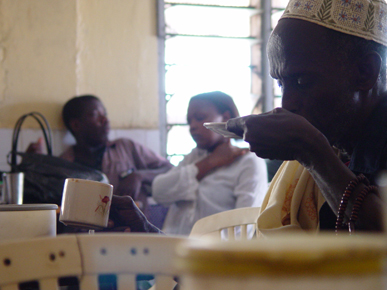 This is an interesting photo but too messy for advertising

These treatments commonly consist of  sharpening and resizing but can also consist of complete reworking and touching-up. The clips left show a photo that has been modified in the design studio. Firstly the people in the background were airbrushed out. this means that the wall, chair and window behind the people had to be drawn in too.

Removing the people from the background has focussed the eye on the rather natty fellow with the hat and what he is doing. It was a perfectly good photo before and we have nothing against the people who were in it but as the Russians knew “some photos just look better without all the people still in it.” 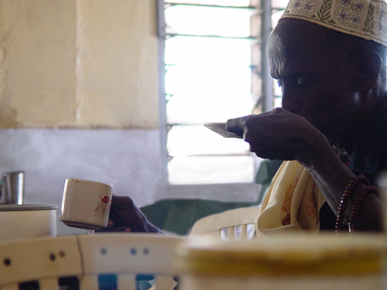 Now it could make a good background for some creative advertising

Having removed the distracting background the photo was then put through some filters to help bring out some of the detail that was previously too dark. Note in particular the beads on his wrist and the contours visible in the face and hands. It’s still a bit dark at this point so some further adjustments are made.

A sepia wash was put over the photo to give it more of a feeling of age and interest. What was a photo that couldn’t really be used for advertising purposes has become an “accent” photo that would give character to the right application. 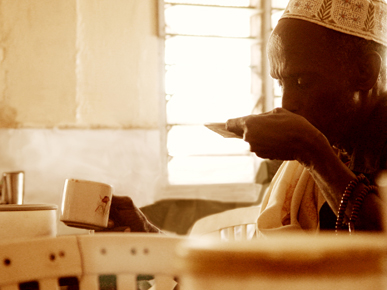 Lighten it and put on a Sepia Wash

Obviously there is a professional aspect to our creativity too. We have leant to be scrupulous in attention to detail, both in brochure and website design. We ensure that all typesetting is correctly justified and that font kerning has been addressed for maximum impact. Putting it all together for your advert we might come up with something like the following image. 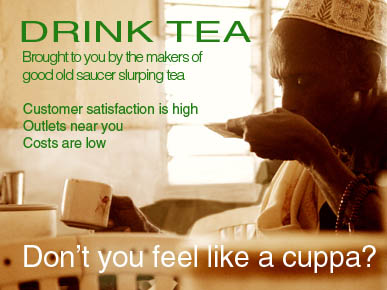 Add the text and away we go, put it on the website, make it into a quarter page advert or whack it out in the next brochure

Obviously this is just a bit of fun for our fictional company “Drink Tea” but you get the idea.

Important pages on this site